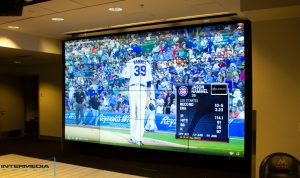 The allure of video walls is their impressive size, bright image definition and the impressive array of multimedia inputs they provide to produce HD quality output. The Miami Marlins organization knew that by adding a contemporary video wall, they would be enabling highly rich content as a backdrop for press conferences in addition to providing a new high-definition presentation platform. They called Intermedia Touch to conceptualize their vision.

The Miami Marlins hit a Grand Slam with an Innovative new look to their press conference room where Intermedia Touch installed a four-display by four-display video wall with 46 inch Samsung displays. These displays have a 5.5-millimeter ultra-narrow bezel display for a seamless and clean look. The new video wall provides an energy efficient and vibrant video display solution for the Miami Marlin’s Press Conference Room!

“When the Miami Marlins set out to add a video wall to their Press Conference Room we vetted many companies. After careful consideration, we enlisted the services of Intermedia Touch. Their team of experts were knowledgeable, professional and understood our needs.  Intermedia Touch has elevated our Press Room experience.” – David Enriquez / Senior Director, Information Technology Miami Marlins

Interested in seeing how the video wall was built? Check out the video right here: https://youtu.be/tUtuslPaOrc

The Miami Marlins were granted a Major League Baseball franchise on July 5, 1991.  The Club’s first game and the win was on April 5, 1993 against the Los Angeles Dodgers. The Club was originally named the Florida Marlins until November 11, 2011 when they officially became the Miami Marlins. The Marlins opened their state-of-the-art, retractable-roof ballpark in Miami in March 2012.The Marlins won their first of two World Series Championships in 1997 in the deciding game of a seven-game series over the Cleveland Indians.  At the time, the Marlins became the quickest expansion franchise ever to win a title in Major League Baseball history.  The Marlins won their second World Championship in 2003 in six games over the New York Yankees.  Since 1993, the Marlins have been awarded two Manager of the Year awards, four Rookie of the Year awards, 11 Silver Sluggers, 11 Gold Gloves, and have had 48 representatives at the All-Star Game. The Miami Marlins, L.P. are owned by Jeffrey H. Loria, who officially purchased the franchise on February 16, 2002.

For further details on the products and services that Intermedia Touch, Inc. has to offer, feel free to contact us at 305-517-3894, or send an email to info@intermediatouch.com. You can visit us online at www.intermediatouch.com or in person at 2600 NW 75 Avenue, Suite 200, Miami, FL 33122. 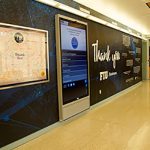 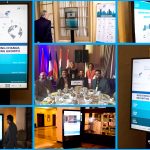